While the discussions on the possible existence of two versions of the GeForce RTX 4080pop up on Twitter two alleged renders of a high-end GeForce RTX 4000 and a testalways of an unspecified top of the range, which paints a great leap forward in performance for the new Ada Lovelace architecture compared to the current Ampere.

The whole was published by leaker QbitLeaksapparently in possession of material that NVIDIA will officially share with the world at GTC 2022, likely during CEO Jensen Huang’s keynote on September 20.

The renderings show us the heatsink of a Founders Edition, in a guise that doesn’t look very different from that seen on the GeForce RTX 3000, apart from the fan that appears larger than in the past. In this sense we find a point of contact with the photo of the alleged RTX 4080 leaked in recent days.

As for the test released by the leaker, it seems that a future top of the range RTX 4000 is able to leave behind an unspecified RTX 3000 of 80-120% in games and productivity. It seems to be tests carried out in 4K with RTX, while it is not clear whether the DLSS is active or not. Could this be the GeForce RTX 4090 compared to the 3090 or 3090 Ti? Maybe, but there is no confirmation. 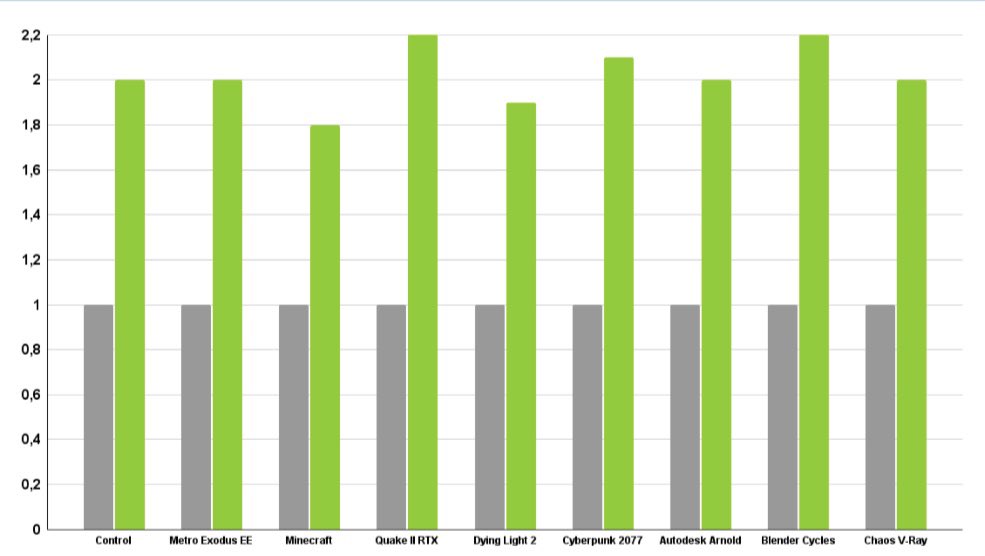 The leaker has limited himself to stating that “this is not the standard-bearer”, which can mean everything and the opposite of everything since we do not know the lineup of NVIDIA. The GeForce RTX 4090, according to previous rumors, should be based on an AD102 GPU with 16384 CUDA cores accompanied by a 24 GB of GDDR6X memory (possibly 21 Gbps) 384-bit bus.