In France we discuss for about two years of a new attraction linked to “D-Day”, as the landing of the allied troops in Normandy on 6 June 1944 is often called. The project should be built near the landing beaches and has been compared by its critics at a Disney-style theme park. A public consultation is underway on its implementation which will end on 7 October. A decision will therefore be made within a few weeks.

On 6 June 1944 the allied armies of the United States, the United Kingdom and Canada they landed in Normandy, in the north of France, and began the battle that led to the liberation of the country and the surrender of Nazi Germany. What went down in history as “D-Day” was one of the largest military operations ever attempted and a turning point in World War II.

The landing in Normandy was above all a great victory for the allies, who however did not achieve all their objectives. American, British and Canadian soldiers had to fight for two months before the German army gave way and began a retreat that only ended on the borders of Germany. The battle of Normandy lasted until 25 August 1944 and was one of the bloodiest of those fought on the western front. In the end it cost the allies more than 220,000 casualties including dead, wounded and prisoners.

The new project is called “Hommage aux Héros”, “Homage to the heroes”, and was announced in January 2020 by Hervé Morin, president of the Normandy Regional Council. Financed with private funds, it should cost about 90 million euros and occupy an area of ​​about 300 thousand square meters in Carentan-les-Marais, inland between the two beaches attacked by the Americans, those of Omaha and Utah. Its promoters hope it will open in 2025 and attract 600,000 visitors a year, who should pay € 28 per ticket.

The attraction (here presentation video) consists and is presented as a 45-minute immersive staging that combines archival footage and performance, a kind of live documentary. Specifically, it would be a mobile theater with a thousand seats covered with screens on a path more than 400 meters long, where the stage meets and opens onto about thirty “tableaux vivants”That allow spectators to embark, to find themselves in training camps, to disembark and to enter the battle. 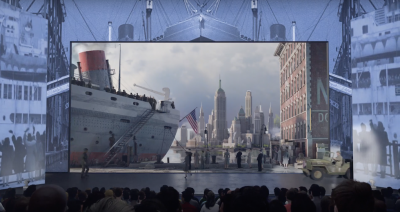 Critics have dubbed the project “D-Day Land”, accusing those who want to make it happen of wanting to reduce one of the most significant and bloody events in European history to a tourist attraction to earn money. For example, Bertrand Legendre, a former professor at the Sorbonne in Paris, explained that the attraction is based on a principle of commercialization of history, which is unacceptable to him.

Among those who oppose the project are committees of citizens, various historians and intellectuals and the families of veterans who have defined themselves upset by the fact that the memory of their relatives “is treated as a tourist attraction”: “The transmission of memory is seen here only as a business opportunity. Giving the green light to this project would demean and devalue the pain and sacrifice of our loved ones, ”they wrote in a collective petition.

In addition to the ethical arguments, some opponents criticize also the environmental impact of the project, which would subtract space from a non-urbanized green area.

Instead, the project’s promoters insist that it will be a historically accurate and appropriate tribute. Régis Lefebvre, for example, said: “We want to convey what happened with great historical rigor and using today’s technology to make it interesting for as many people as possible. It is not a theme park. As for the argument of making money, who seriously starts a business to lose money? ‘ In turn, Hervé Morin supported the project as a means of «combining memory and tourist development done with dignity».

Richard Dannatt, president of the British Normandy Memorial, dedicated to soldiers who died under British command during the Normandy landings, is taking a neutral position on the new attraction. However, he pointed out that a number of veterans and their relatives have “significant reservations” about it. Dannatt then added that “there are many memorial sites in Normandy, which is fair and correct. Those where people go to pay tribute, such as the British memorial, are free and we point out that the proposed site will instead be paid, which makes it very different ».