The Space Launch System (SLS), the huge new NASA rocket to return to explore the Moon with the Artemis program, fails to start and continues to remain firmly on Earth mainly due to hydrogen, the lightest element and abundant in the Universe. Somewhat elusive, last Saturday he ruined the plans of the US space agency by leaking out of the system used to refuel the rocket’s tanks. Aware of how difficult it is to deal with hydrogen, NASA engineers tried three times to solve the problem, before resign to a postponement of the launch after that of the previous Monday.

Rocket science, in short
“Space is hard”, “Space is difficult”, is a phrase that is often heard in the space industry: overcoming the earth’s atmosphere requires an enormous expenditure of power and, if something goes wrong, the results are almost always catastrophic with the destruction of the rocket and what it is carrying. Despite many of the technologies of SLS are derived from the Space Shuttlesone of the most successful space programs, the new rocket has never flown before and many of its systems have been tested under conditions other than those of the launch pad.

Just like for the Shuttles, the SLS also uses two different types of propulsion to reach orbit carrying Orion, the spacecraft which then continues its journey to the Moon. In the first two minutes after launch, most of the thrust is provided by the two Solid Rocket Boosters (SRBs), rockets that use a solid propellant and that we can imagine as very powerful fireworks as high as a 15-story building. When ignited, they burn about six tons of propellant every second and produce more than three-quarters of the thrust required for the first launch phase. Once their work is finished, they shut down and separate from the rest of SLS to return to Earth, diving into the Atlantic Ocean where they are not recovered.

The Space Shuttle Discovery compared to SLS, the SRBs are the two white cylinders on either side of the “Core Stage”, the central orange cylinder (NASA)

The operating principle of the two RBSs is relatively simple, as is the management of the propellant that is kept inside them. They offer great power, but have the disadvantage of being difficult to govern, and in the event that the segments that constitute them are not well connected, explosions and accidents can occur. as happened to the Shuttle Challenger in 1986. The second system used by SLS is more manageable, but also for this reason more complicated to manage.

Instead of using solid propellant, the SLS ‘Core Stage’, the large orange cylinder, uses liquid propellants. It is to all intents and purposes a huge tank almost 65 meters high and with a diameter of over 8 meters, to which four engines are ensured in its lower part. The cylinder consists of two distinct tanks: one for oxygen and the other for hydrogen. As we know, these two elements at ambient temperature and pressure occur in gaseous form and are rather rarefied, therefore occupying a lot of volume. By cooling the quantities required for launch at extremely low temperatures, these gases become liquids (LH2 and LOX) and take up much less space, making it possible to store them under pressure in the tanks of the Core Stage. 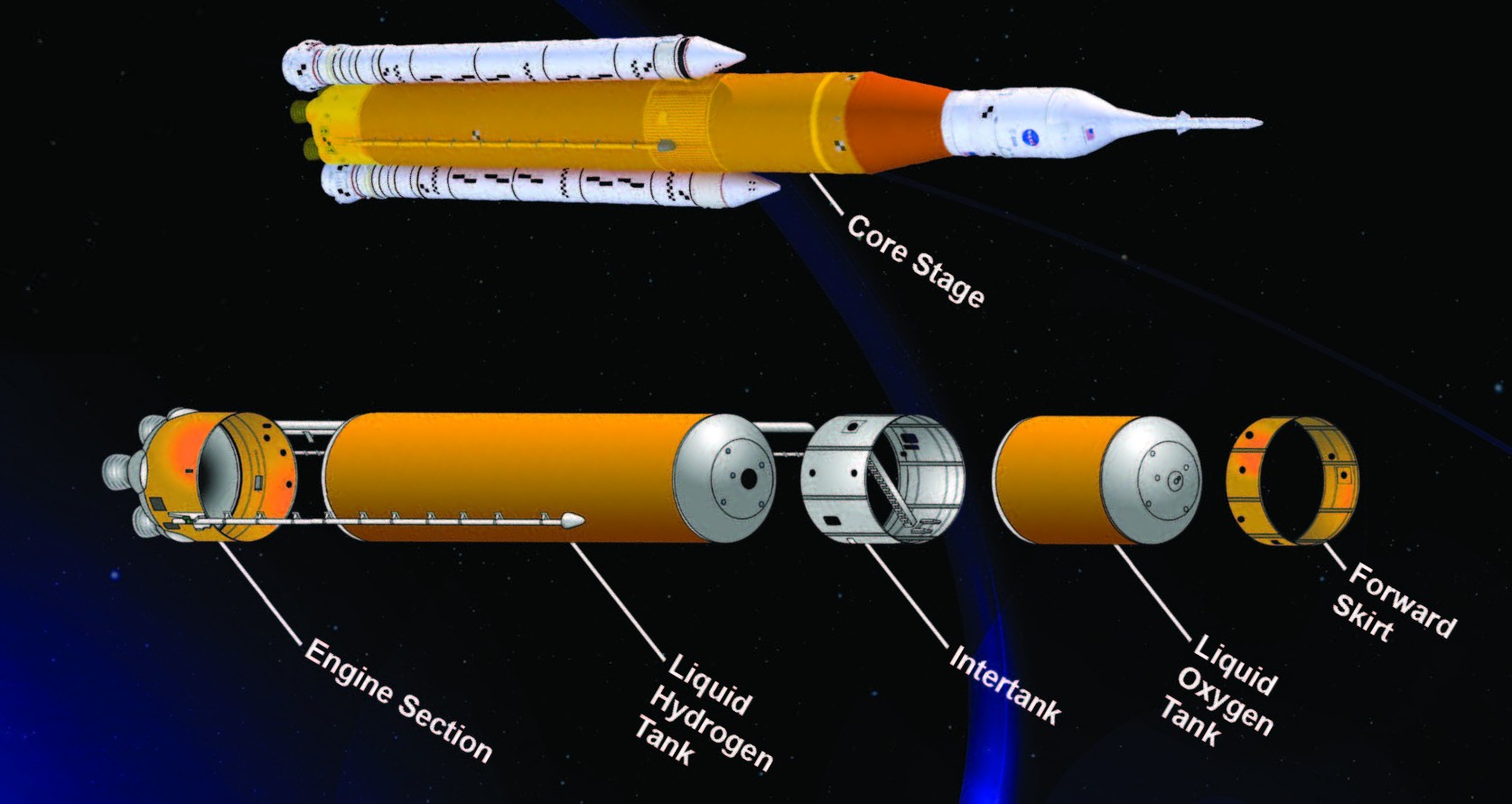 Liquid hydrogen is the fuel, while liquid oxygen is the oxidant: together they form what we call a propellant. When the two elements are made to flow from their respective reservoirs and meet, they produce a highly energetic chemical reaction whose waste product is water vapor (two hydrogen atoms and one oxygen are the constituents of water). By using systems to circulate the two high-pressure fluids in the engines, the necessary combustion is produced to move the large mass of the rocket and make it continue its journey beyond the earth’s atmosphere that the two RBSs had initially provided.

Hydrogen
Various types of fuels can be used in liquid propellant rockets and over the years dozens of them have been tested, but hydrogen is among those that offer the best performance in relation to specific weight and yield. The problem is that keeping hydrogen under control is very difficult, because it is very light and tends to slip in all over the place. It remains liquid at about -253 ° C, but slight variations in temperature or pressure are enough for it to evaporate quickly. Storing 800 tons in a tank for a few hours can be quite a headache.

Rocket tanks using very low temperature propellant have foams and other insulating materials on the outside to reduce heat loss. Since a few hours usually pass between refueling and launching, the rocket remains connected until the last useful moment to the pipes that carry the liquid propellant from the ground systems to its tanks. It is a bit as if at the gas station we left the dispenser attached to the car to compensate for the slightest evaporation of gasoline until the last second before leaving (but don’t do it). 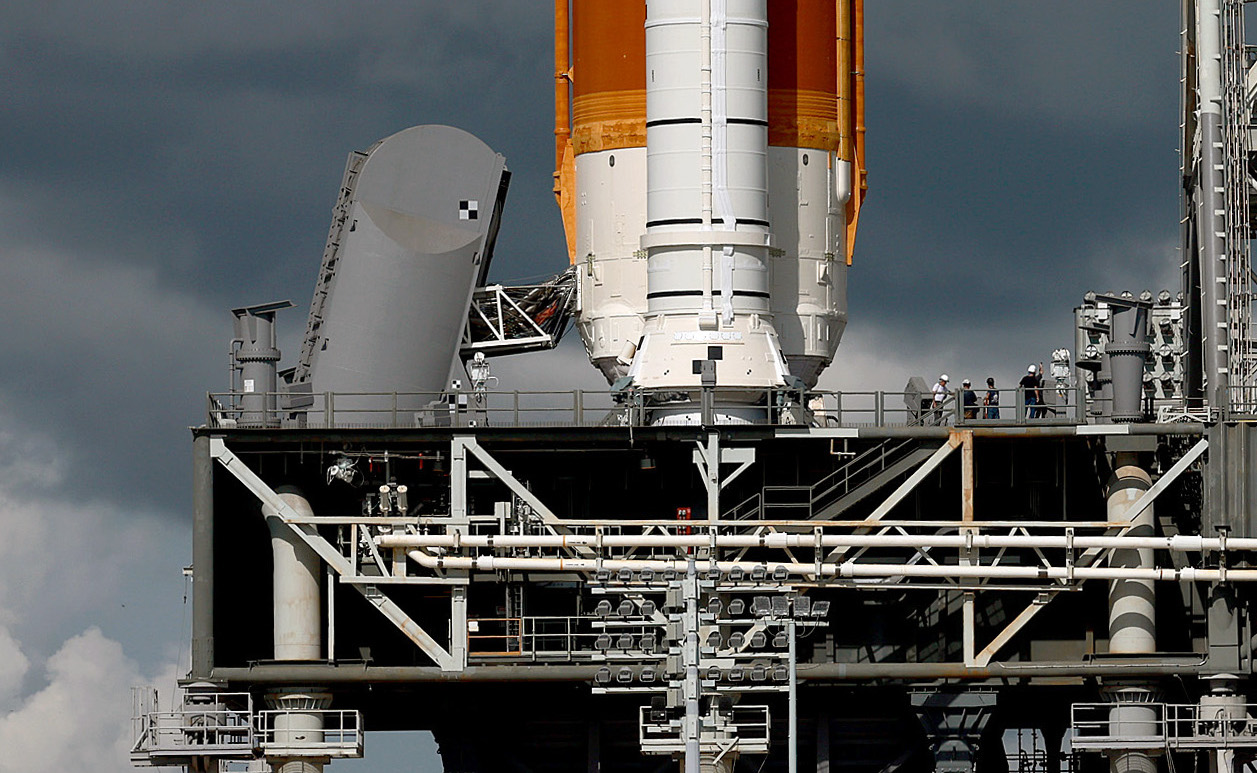 In the last moment before the rocket’s departure, a quick disconnect system detaches the supply pipes from the rocket, so that it can leave without taking them along. The detachment must take place in the least traumatic way possible, consequently the equivalent of the petrol dispenser cannot be screwed to the rocket and must be free to remove easily. Seals and other systems are then used to keep the supply pipeline attached to the rocket, but it is almost impossible to seal it completely, especially if you are dealing with liquid hydrogen, which as we have seen easily sneaks into the cracks.

Being a known problem to live with, NASA engineers have a tolerance limit for the loss of hydrogen on the launch pad, which is detected by some sensors near the quick release system. If around this the concentration of hydrogen is less than 4 percent, you can continue with the preparation of the launch, otherwise you must stop because as the quantity of dispersed hydrogen increases, the risks of a fire that could destroy the rocket increase.

Referral
In the case of the later postponed Saturday launch, NASA had detected approximately double and in some cases triple the maximum permitted hydrogen concentration. The technicians had therefore interrupted the refueling of the tank that was to contain the hydrogen twice, trusting that in this way the rapid detachment system would warm up a little, leading to a new expansion of the materials that connect it to the rocket. The attempts had proved in vain and not even another attempt to increase the pressure in the pipes, hoping to make the connector better adhere, had led to progress making it necessary to postpone the launch.

These maneuvers, like all the other rocket preparation operations in the last hours before launch, can only be carried out remotely for safety reasons and this reduces the possibility of intervention by the technicians. In the hours and days after the postponement, NASA analyzed data and status of the detachment system, noting that an incorrect command to a valve could have contributed to the loss of hydrogen, which would then have compromised the tightness of the connector to transfer the hydrogen. in the rocket.

Garage
On Monday, September 6, NASA decided to proceed with some interventions directly on the launch pad, now that it is approachable again, avoiding bringing SLS back into the Vehicle Assembly Building (VAB), the large building where the rocket. Remaining on the ramp you can perform some tests with the liquid propellant that cannot be performed in the VAB. However, there are some safety systems that can only be overhauled inside the building, such as explosive charges that can destroy the rocket if it gets out of control immediately after launch: they must be checked every 25 days and it is therefore likely that however, there will be a transfer to the VAB in the coming weeks.

Known issue
That hydrogen was one of SLS’s finer points had long been known, given that the same element had been the main cause of recurring problems with the Shuttles. On average, every Shuttle launch was postponed once and in some cases there were five postponements for the same mission. Often the responsibility lay with the hydrogen refueling system and the difficulties in containing leaks.

Some have observed that many problems could have been avoided with SLS if other fuels such as methane or kerosene had been chosen. However, NASA did not have great choice: when in 2010 Congress – which periodically decides how much money to give to the space agency – authorized the development of SLS, it asked that technologies already available starting from those of the Shuttles be used and that the same historic US space contractors that are very influential in Washington, DC. In many states there are companies that have worked for NASA for decades and are held in high regard by political representatives, because they employ thousands of people. 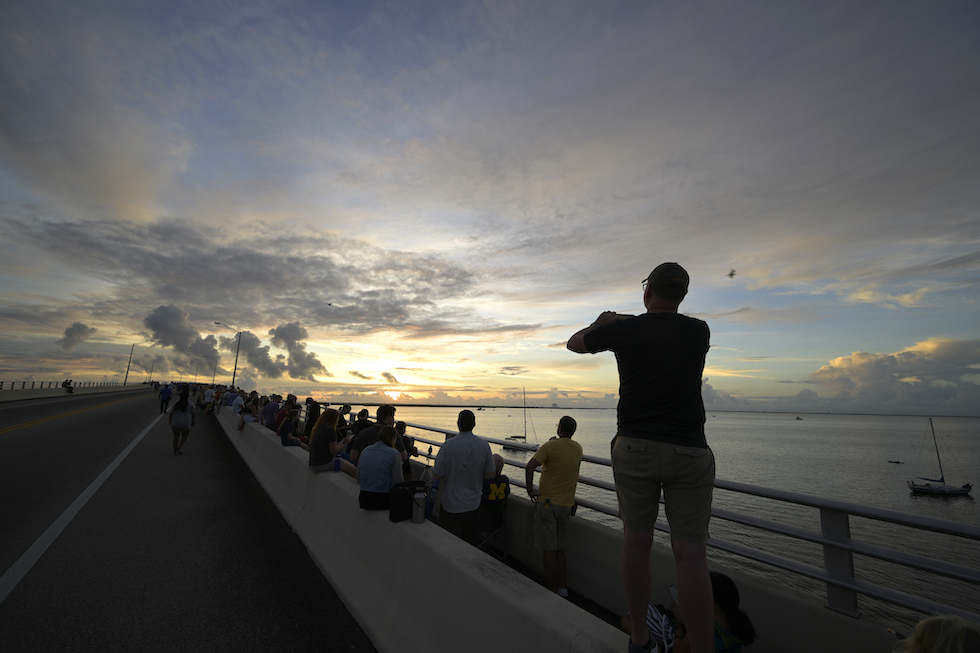 By binding NASA to the use of already developed technologies, Congress was confident that it could save on the development of the new rocket and at the same time guarantee the space industry some continuity with the contracts. That choice would have conditioned the subsequent evolutions of the US lunar program, which recently became Artemis with an ambitious project of involvement of other private subjects. In the meantime, SLS would have accumulated enormous delays by overshooting its initial spending plans by several tens of billions of dollars.

Despite these and other difficulties, in recent years the development of the SLS has continued and involved various tests before arriving on the launch pad, which also involved the rocket refueling system. Including the attempts on Monday, August 29 and Saturday, September 3, NASA tried at least six times to refuel the rocket, failing to complete the operation. The failures and postponements, not so unusual in space launches, however, have allowed NASA to collect data and make analyzes that may prove useful in view of the next launch attempt. A date has not yet been communicated, but by now it is likely that the new adventure towards the Moon will not begin before next October. Space is difficult.